We have arrived! Finally, after many long days on the road, we’ve made it to Grand Teton National Park. 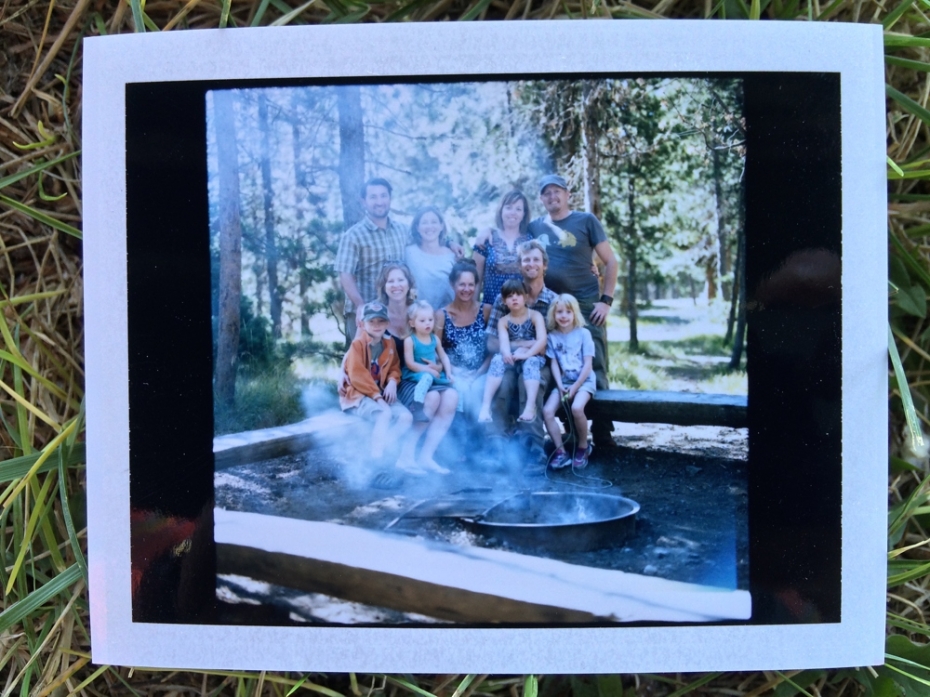 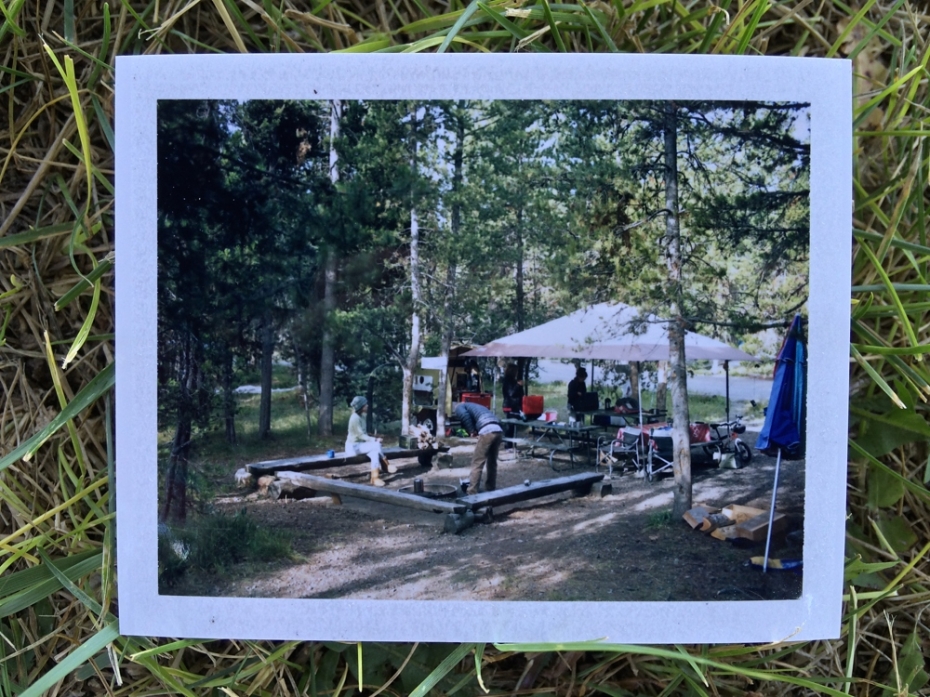 All 11 of us are spread out in this one large site, with lots of grass, trees and wildflowers and a great, huge campfire area lined with large logs to sit on. 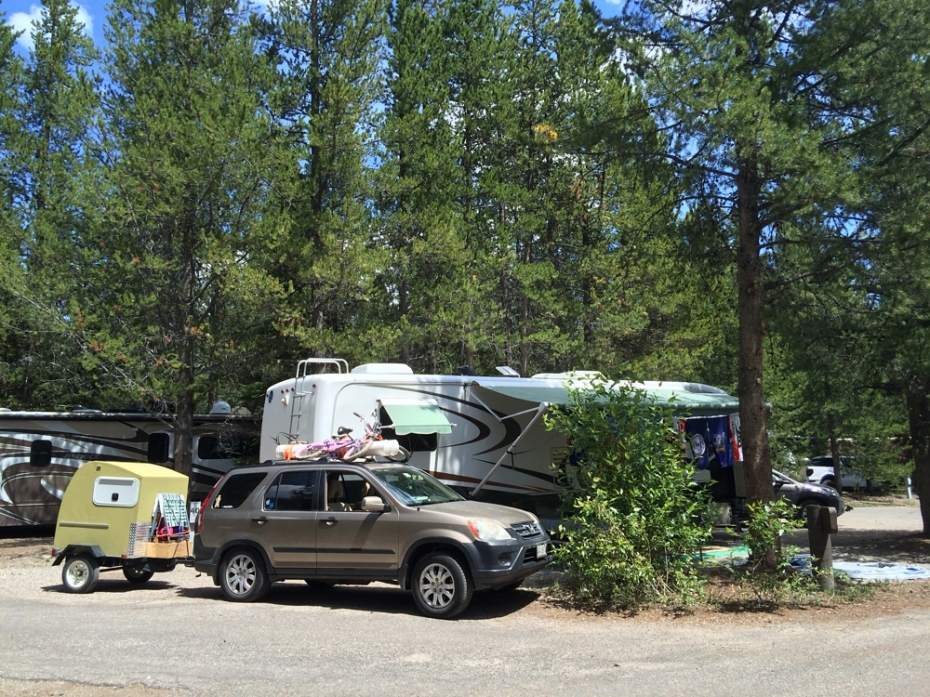 The bathrooms are just across the lane, but unfortunately, no hot water or showers are inside. If we want to shower, we’ll have to do a bike ride up the hill to one of our family’s cabins or to Dave’s parents’ RV site, or pay for a public shower ($4.50 apiece). This is roughing it, people!

Phoebe and Uncle Matt, off on a bike ride to a Ranger Program about cougars.

Pretty much every night we were together, the whole Spence clan gathered at our group site for an evening campfire, some S’mores,  and lots of chatting.

Grandma and Jackson, in deep conversation (probably about books!).

Every morning, we woke ourselves up over coffee and a campfire.

Dave’s brother, Matt, brought his awesome boat (handmade by him, of course) and took many of us out on floats on the Snake River during the week. First up was Dave and their cousin, Jamie and his daughter, Piper.

Jamie is an avid fisherman in Western Pennsylvania and this was his first trip to the Tetons. He was super excited to get his hands on some cutthroat trout.

Jamie, Dave, and Matt: A redo of one of our favorite images from a Spence vacation about 14 years prior, in Wintergreen, Va.

Jackson was itching to try out some fishing himself, and Uncle Matt was a patient teacher.

On another day, we borrowed Kurt’s raft and paddled alongside Matt’s boat on the Snake River.

One afternoon we drove south to Jackson Hole, Wyoming and spent some time exploring the town square.

We have another photo of 1-year-old Jackson at one of these arches. And now, the girls.

Next we drove over to the Bar-T-5 Covered Wagon Cookout for dinner. While we waited for the wagons to be ready, Jackson and Piper played checkers.

Also while we waited, Phoebe’s first tooth decided to fall out. She was terrified and excited, all at the same time.

Soon, it was time to load up onto our covered wagons and head up the canyon to our cookout.

The evening’s entertainment included audience participation. Kurt and Marcia were called up to help sing a song. And poor cousin Sydney was manhandled by a “mountain man” who tried to marry her. It was … interesting.

Heading back down the mountain after dinner, and the cool, rainy weather produced a rainbow!

Our only group photo for the trip… Happy 45th Anniversary, Marcia and Kurt!

Another highlight of the week was a 2-hour morning horseback ride.

It was Jackson’s first time on a horse!

It was Naomi’s first ride as well.

Each of the horses wore a feedbag for the entire ride, to prevent them from eating too many wildflowers or other natural features and ruining the trails for other visitors.

We saw some incredible scenery as we rode past Swan Lake.

And the guides new the perfect spot for a group photo! Can’t beat those Tetons.

When it was time to leave, we all were allowed to give our horses some treats.

Later that afternoon, it was Phoebe’s and Ginger’s turn to ride ponies.

For the entire ride, these two talked the guide’s ears off about everything from Farm Camp to princesses to lost teeth. He was a really good sport about it.

On one of our final days at the park, the kids completed their Junior Ranger books by attending a Ranger Program about the animals at the park.

After their books were checked, they were able to choose between a wooden badge (very rare in Junior Ranger world) or a patch (also rare, but slightly less so). Jackson chose the wooden badge and Phoebe took a patch.

This was our daily view at Colter Bay… not bad.

Naomi and Molly took the kids out for a hike one day, and got about 10 minutes in before the kids jumped in the water, fully clothed.

Another day, we drove down to Jenny Lake to do a hike closer to the mountains.

A giant elk was sitting in the grass, just a few feet off the path.

On the way to the hike, we spotted another elk in the fields.

All the Jenny Lake hikers, minus Chuck and Jo, who powered ahead of all of us!

We hopped on the boat with Aunt Jan and Uncle Bob for a ride back across the lake.

So happy to get a (rare) photo of these two together!

Dave’s shirt said it all.

We caught up with Chuck and Jo at the falls.

What a beautiful hike and boat ride!

All too soon, it was time to say goodbye to the Tetons! A quick pic with the sign on our way out, and up to Yellowstone!

Yes, we had a great week with all the Spences. And just for the record, Jackson and Finn are 2nd cousins. And good buddies.