Our first stop after setting up camp at Yellowstone National Park’s Grant Village was Old Faithful, of course. How could we resist this icon? As luck would have it, we arrived only about 20 minutes before the next predicted eruption. We quickly browsed the lovely visitor’s center (new since our last visit in 2007, with baby Jackson) and then headed outside with our Junior Ranger program booklets in hand, ready to earn a new patch. 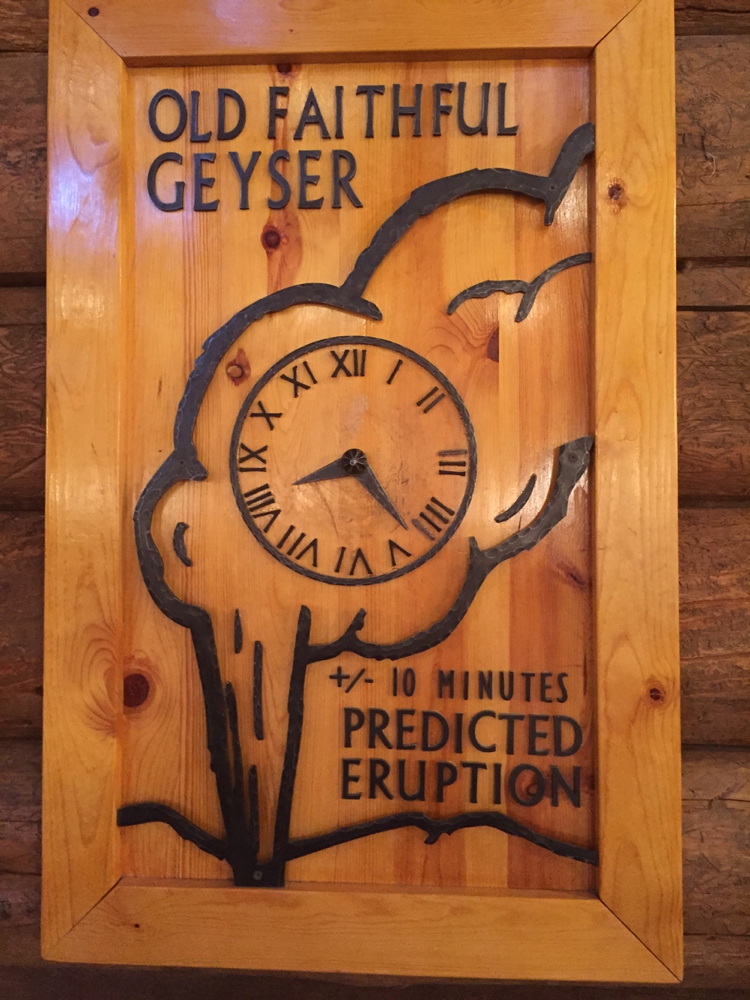 I love this old-fashioned prediction clock, in the Old Faithful Inn. 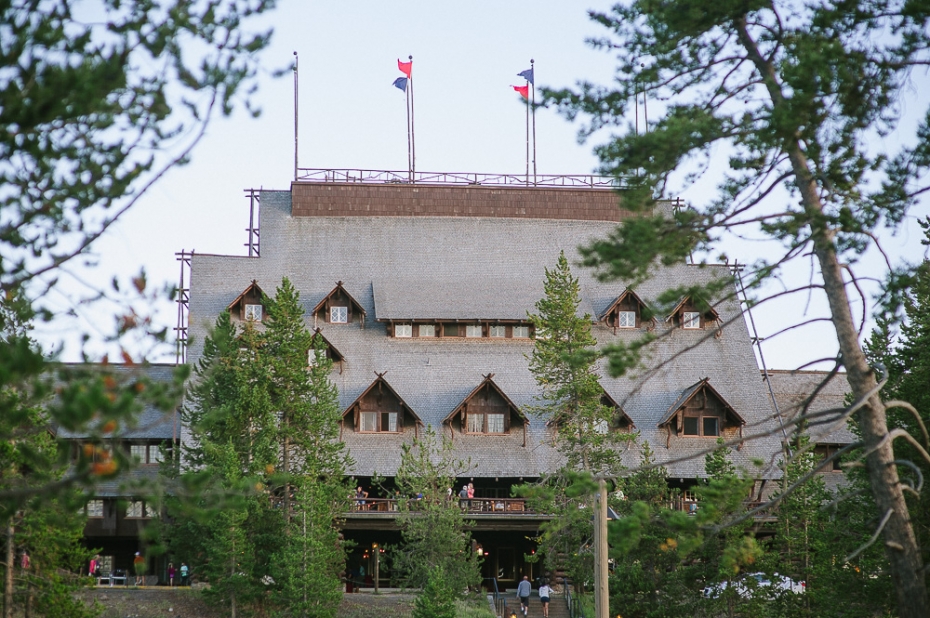 We’re plotting a stay at the inn the next time we visit… it has so many lovely, old details. We can’t resist.

After the eruption, the massive crowds dissipated, and we headed out on the boardwalk trail to see more geysers and other hydrothermal features at the park, until the next eruption (which we were predicting for about 8:03 p.m., according to our handy chart in the Junior Ranger book; the “real” rangers predicted an 8:21 eruption).

Yes, Old Faithful is a must-visit, but the other geysers and hot springs nearby are equally amazing.

Jackson and Phoebe spotted a bunch of bison scat near the hot springs. We found out later that the bison do like to sleep near the hydrothermal features in the park, to keep warm at night.

It turned out that neither of the predictions were correct. Old Faithful kept us waiting for its next eruption until 8:35 p.m.!

It was getting very dark and cold, so we grabbed a bite to eat then headed back to our campsite, a 40-minute drive away.

The next morning, we prepped for a day in the car, exploring as much of Yellowstone as we could in one day…

We started at our campsite in Grant Village then headed northeast through West Thumb and toward Lake Village. We decided we could easily cover the bottom circle of the figure 8 that makes up the main part of the park and be back by dinnertime.

Our first big stop was the mud volcanos at the Hayden Valley, where we encountered more than a dozen bison, grazing and hanging out near a trail. Two park rangers were posted nearby and prevented anyone from getting too close to the animals.

What amazing creatures. They seem cow-like, but grunt and groan and roar almost like a calm lion. From far away, they seem docile, but up close, they are quite imposing.

After awhile, this guy got very close to where visitors were standing (including Molly and Jackson). The park ranger shouted for everyone to get back and crouch behind a car if they could. Yikes!

These two seemed to be conferring with each other, debating about whether to get up on the boardwalk where the humans walk, then jumping off together toward the other bison.

Several of the animals took long drinks from the hot springs. We asked a ranger whether that was healthy for them, and he said their digestive systems were equipped to handle the hot liquids and that they got vitamins and minerals from the water, too.

One of our favorite spots here was the Dragon’s Mouth hot spring, where steam breathed out of a cave regularly, as if a dragon was trapped inside.

One of the most amazing things about Yellowstone is how much and how quickly the landscape changes. (Above, we used binoculars to spot a grizzly bear eating the carcass of a bison.)

Just up the road, a major traffic jam was caused by this guy, who was walking along the middle of the road on the yellow lines, between rows of cars.

A beautiful day for this fisherman.

And for this bison, grazing nearby.

Next stop was the Grand Canyon of Yellowstone. Dark clouds had rolled in and cold winds followed. Regardless, the falls and canyons were just gorgeous in person.

After lunch huddled under a tree to shield us from the cold, we moved on… to the Norris Geyser Basin.

We attended an interesting Ranger Program about the Yellowstone volcano and hydrothermic activity. Specifically, great stories were told about Steamboat Geyser, located here. It is the world’s tallest active geyser and last erupted in November 2014. Its eruptions are totally unpredictable and last for weeks.

Porcelain Basin Hot Springs were lovely and spooky all at the same time.

On our way to the Old Faithful Visitor’s Center to claim our Junior Ranger patches, we found another elk in a field.

These folks were getting way too close, and a ranger had to shoo them away. Soon, we arrived at the visitor’s center, attended another ranger program (this one about animals), and took the pledge before getting our badges.

It was a long, full, cold day! In fact, we were told by several rangers to expect snow that night. So, on our way out we bought a winter jacket for Jackson and a warm blanket for the tent. We didn’t see any snow, but temperatures did drop to about 40 degrees!