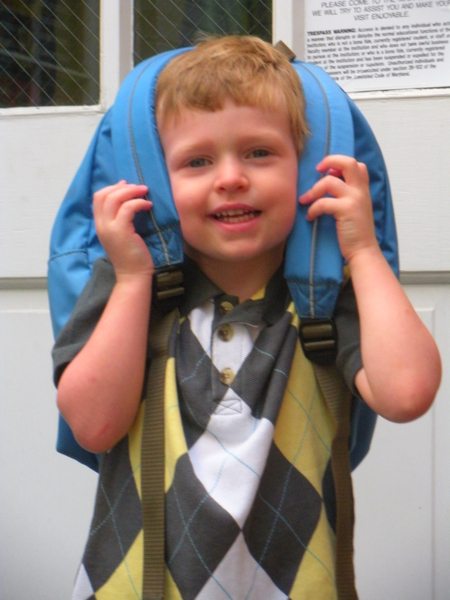 jackson started his first “official” day at school on wednesday. he entered monocacy valley montessori public charter school (mvmpcs) as a full-fledged pre-k 3 student! we were lucky enough to win one of only six 3-year-old spots in the program during a lottery earlier this year. and so, jackson attends the preschool free of charge five days each week. the school serves students from age 3 through 8th grade, and jackson may attend through that grade, if we find he is thriving there. so far, so good! 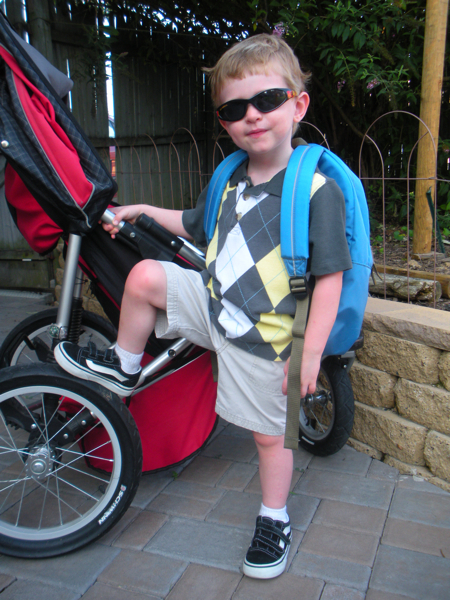 we think this photo defines the phrase “too cool for school”! jackson rode in style in his stroller for the first day, as the whole family walked to mvmpcs. it’s about a mile from home, and not a bad walk on a cool summer morning. 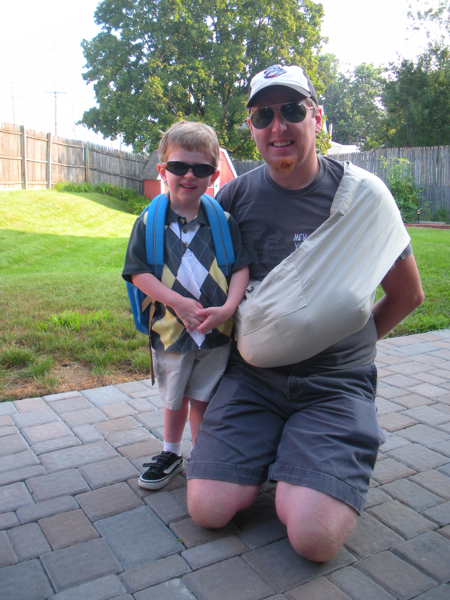 even phoebe was along for the ride! she’ll get to attend the school, too, since siblings get first dibs on spots in the program.

no tears as jackson entered miss heidi’s classroom. he was a bit unsure of himself and reluctant for mom to leave. but once the teachers came over to show him some fun stuff to play with, and his friend, zach, arrived at the classroom, we were all set! at pickup time, he told us all about his new friends and the adventures and snacks he had during the day.

during the month of july, jackson attended the lucy school in middletown, for its “early 3s” summer program. he attended on thursdays and fridays in the morning for the whole month, and the experience really got him primed for school. he enjoyed singing and “drama” especially, and made several new friends.

the theme for the summer program was “bunnies” and lessons were formed around several bunny-themed children’s books. the final week focused on “the runaway bunny” in which a little bunny decides to run away from his mother and join the circus, among other adventures.

jackson and his schoolmates acted out the circus scene by jumping on a mini trampoline and walking a balance beam, all the time wearing tutus and fluffy bath sponges as tails!