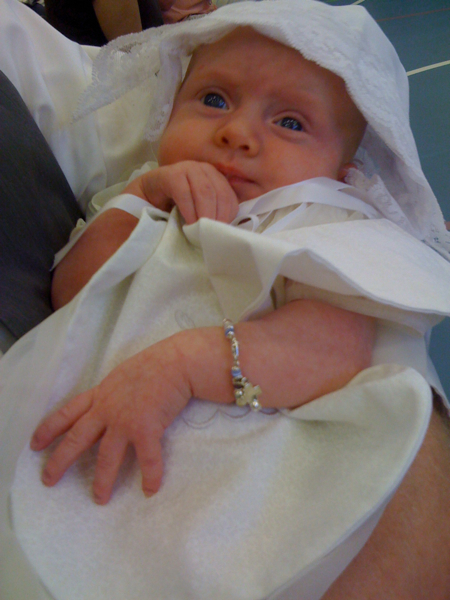 phoebe kate spence was baptized at saint katharine drexel church in frederick, maryland on sunday, sept. 20. we were happy to be surrounded by family, and some friends, as she joined the catholic faith during the 11 a.m. mass. just like her brother, phoebe was baptized via full immersion by the rev. keith boisvert (hopefully someone else got a good shot of that!), and after she was “dunked,” she wore the baptismal gown that molly and all of her siblings wore. most of phoebe’s cousins have worn it as well. (to see more photos from the day, click here.) 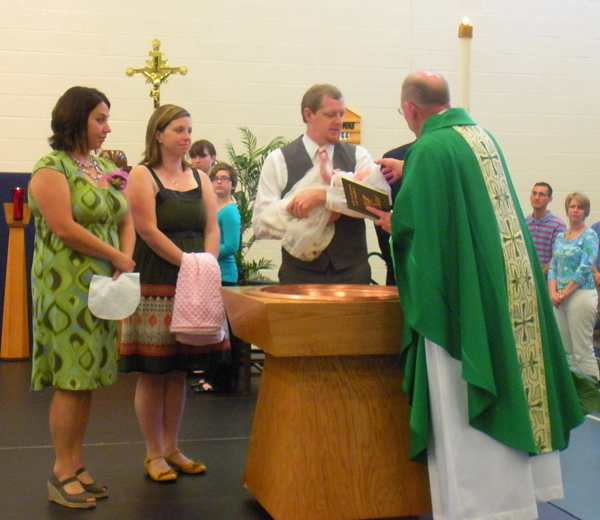 when we pulled off the blanket to reveal a naked little phoebe, many in the congregation gasped, and several people were crying as father keith dipped her whole body in the font three times. it was beautiful. above, father blesses phoebe with the chrism. 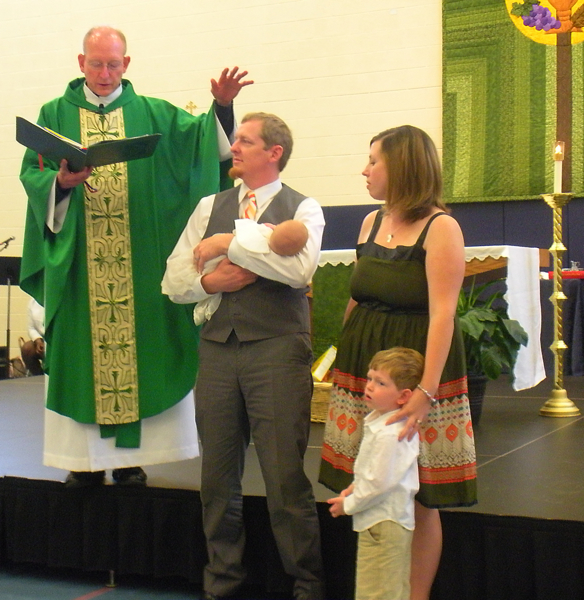 father keith is a wonderful celebrant, always making the congregation feel at ease, even when a screaming baby or a bashful 3-year-old is threatening to ruin the mass. here, he gives us the final blessing.

a special thanks goes out to lynne and amy, who rushed back to the house to get the corsage and boutonniere for the godparents (molly’s nephew, colin, and sister, beth), after we left the flowers in the fridge!

after mass, the whole gang headed to la paz, a restaurant in downtown frederick. following a hearty mexican feast, during which we all ate way too many tortilla chips, we headed back to the spence house for a delicious cake (pumpkin cake with cream cheese icing, topped with creamery ice cream, provided by amy! woo!). molly picked up the cake from ed’s country bakery at the farmer’s market on saturday — right before she bumped into ‘top chef’ contestant bryan voltaggio! local celebrity sighting!

molly and dave want to say a special thanks to all the family who made the trip to maryland for phoebe’s special day. it meant a lot to us for you all to be here. and to those of you who couldn’t make it — we missed you!

Great photos! Phoebe is so sweet. Everyone looks pretty and dapper all dressed up for special day. Thanks for the pics. We missed being there with everyone.