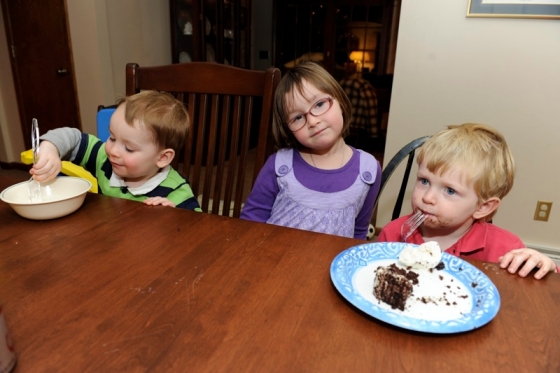 the spences headed north for thanksgiving this year — to the great, white north, actually. as we got further from frederick and closer to franklin, pa., the snow got deeper and deeper. so, instead of thanksgiving, it was more like christmas!

jackson is a big fan of aunt jan and was so excited to meet simon the west highland terrier and noah the cat, and play with all the great toys hidden behind the family room couch! it didn’t take him long to discover finn’s and piper’s stash!

we were all so excited to spend the holiday with the hines and daly families! it had been a super-long time since we’d last seen the dalys — in fact, we’d never even met finn. despite that, jackson became fast friends with finn and piper. 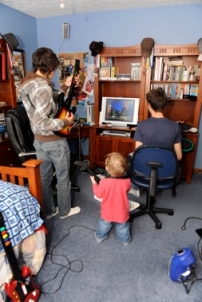 but he especially loved piper! and she knew it! every time he’d come near her, she’d hug him and tell us “I know he loves me!”

on thursday, we ate a big turkey lunch — dave cooked the bird in our frier, with jamie’s assistance. and on friday, we had fun exploring the greater franklin area, then had dinner and cake to celebrate bob’s birthday!

jackson even got in some jam session time with burt and his friend on guitar hero!

we headed home late on friday night, and we were sad to go! but there was way too much work waiting for us here.

special thanks to jan, who was a wonderful hostess, treating jackson like a little king (extra whipped cream on that ice cream cone? of course!!) and to burt and bob and noah and simon for sharing their home with us. it was so great to see all of you — kayce, jamie, finn and piper especially! we hope it won’t be so long before we see you all again!