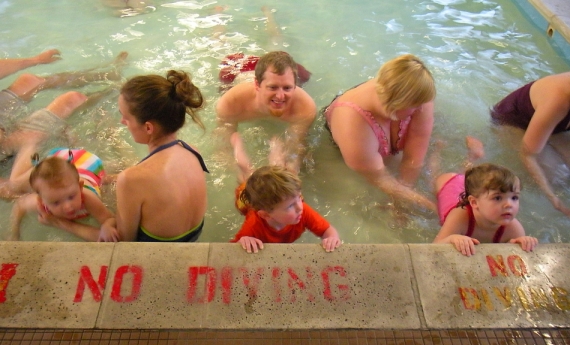 jackson was still napping when it was time to get ready for his first swimming lesson at hood college, so when we arrived at the pool, we had a tired, cranky guy on our hands.

he didn’t want to go in the pool or talk to the teacher at first. but after a while, he really got the hang of things!

during the 30-minute lesson, mom and dad both got in the wading pool with jackson to help him learn to kick, put his face in the water, and float on his back. but the best part by far was the end of the lesson, when jackson learned how to climb out of the side of the pool, then jump into daddy’s arms in the water! he had the best time.

it was so much fun, in fact, that he didn’t want to get out of the water at the end of class! ah, the life of a two-year-old!