while most people remained holed up in their homes, waiting out the blizzard of 2010, which dropped at least another foot of snow on top of 32 inches that fell only a few days before, what were we doing? walking downtown to volt, of course, to interview and photograph famous chef bryan voltaggio and eat the food he and his staff created in a special “snow fixe” menu.

are we crazy? yep! but who could pass up this opportunity? dave and molly first ate at volt in october 2008, and fell in love with the food. one year later, bryan and his brother appeared on “top chef” and became nationally recognized personalities. jackson loved to watch the show with us, and could spot bryan every time he came on screen.

on wednesday afternoon, as winds howled outside, molly fielded calls from her reporters, all working at home. one of them lamented not being able to cover a great story — the fact that volt was indeed going to open its doors to diners during this historic storm. so molly said, “ok, i’ll cover it instead!” she was eager to put her reporting skills to good use again. and, what luck, she happened to live with one of the gazette’s freelance photographers. so, she volunteered dave to work, too!

check out the story and photos by clicking here.

all of us got majorly bundled up, phoebe riding with molly in the bjorn, and headed out for a surprisingly short walk downtown. when we arrived, the staff was waiting for us, and helped us get our many layers off and put away. we settled in for a memorable dinner.

it was such a wonderful experience in so many ways. first, the other diners were all so fantastic! everyone was in a great mood and very willing to talk. our “neighbors” to the right took several photos of jackson and complimented us on our very well-behaved children. another fellow diner offered to take  a family shot of us eating, and a third gave jackson his iPhone so he could play a game on it.

the highlight for molly — aside from the outstanding food — was definitely getting to meet bryan, and hang out in his kitchen for a short while. he is a bit shorter in person than he looks on television. but he’s very kind, genuine, and knowledgeable about food. he talked about getting himself and his staff up to frederick through the storm, about wanting to get back in his kitchen and cook after a long absence, about loving downtown frederick, and wanting to offer those of us living downtown a respite from the storm.

what a wonderful dinner, and a memorable way to spend a snowy day. we won’t soon forget it! 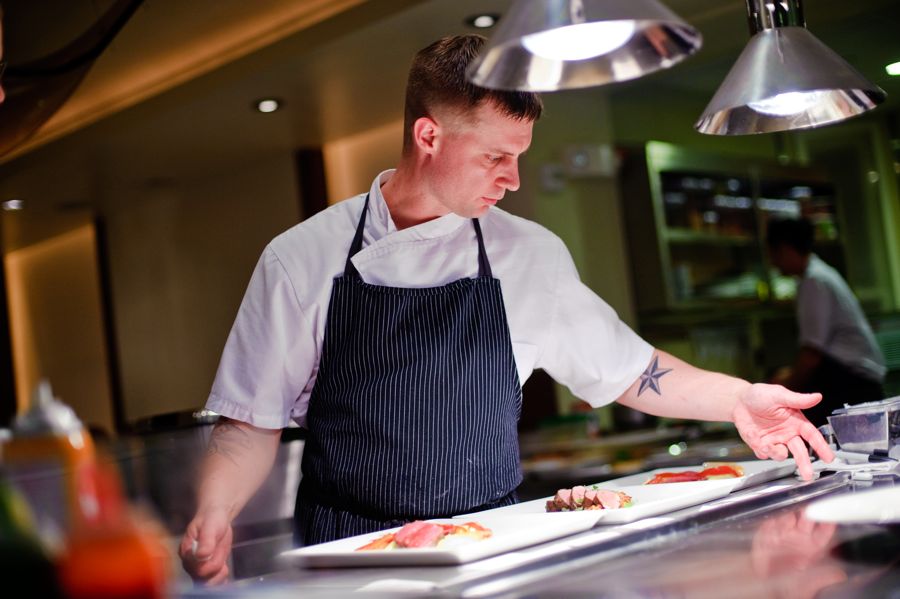 Wow, I think you guys win the prize for most interesing week. You sure are adventurous and your kids have some of the most sophisticated palates of the under 5 set. Looks like a bunch of fun and one way to forget about the weather. Glad to know Volt does vegan – maybe I’ll get a chance to try it.