We woke up bright and early today and were greeted by a lovely South Dakota sunrise at Big Pine Campground in the heart of the Black Hills. After some pancakes and coffee, we were ready for our two disparate adventures of the day, a visit to an iconic American site, and a real Wyoming rodeo! 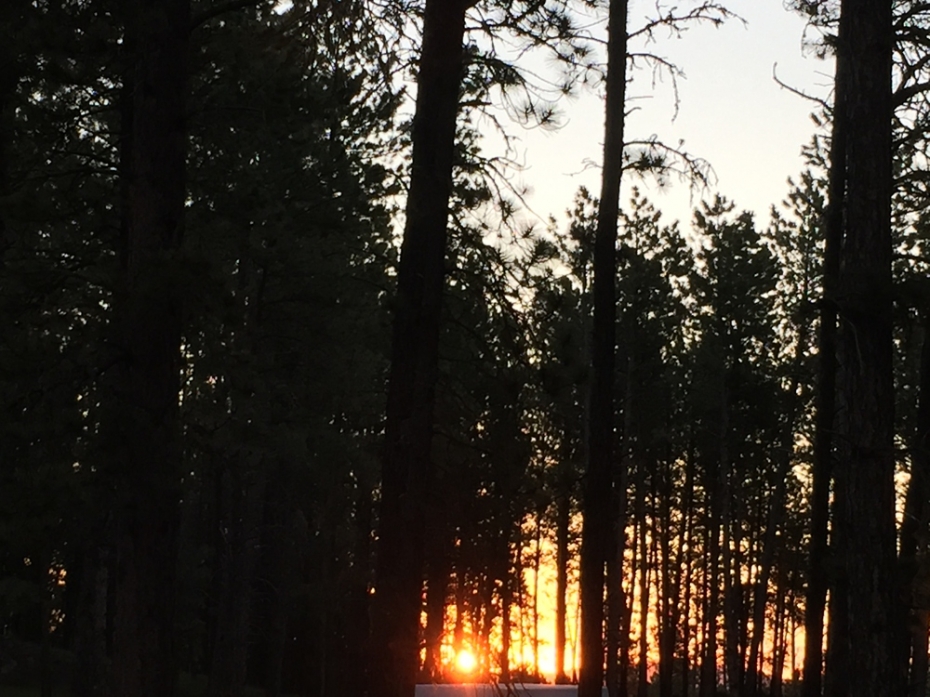 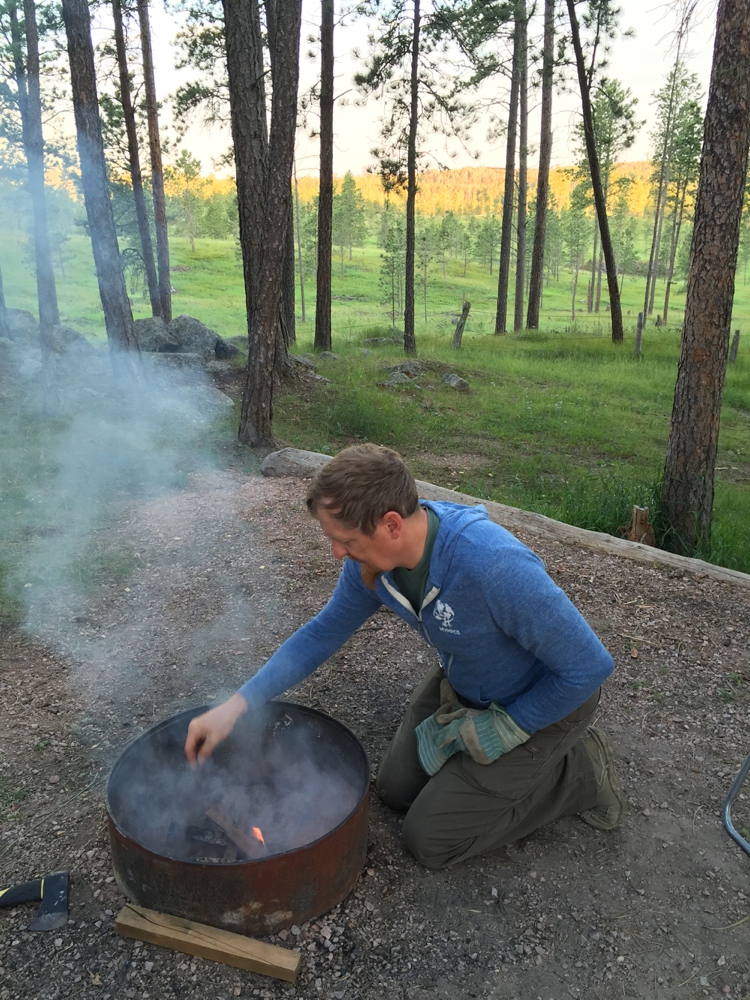 Early in the morning we were on the road to Mount Rushmore, just a short drive away. First, we stopped on the side of the road to see the Crazy Horse Memorial, which could be seen from the highway. We opted not to drive up close, since we wanted to spend lots of time with the dead presidents instead. 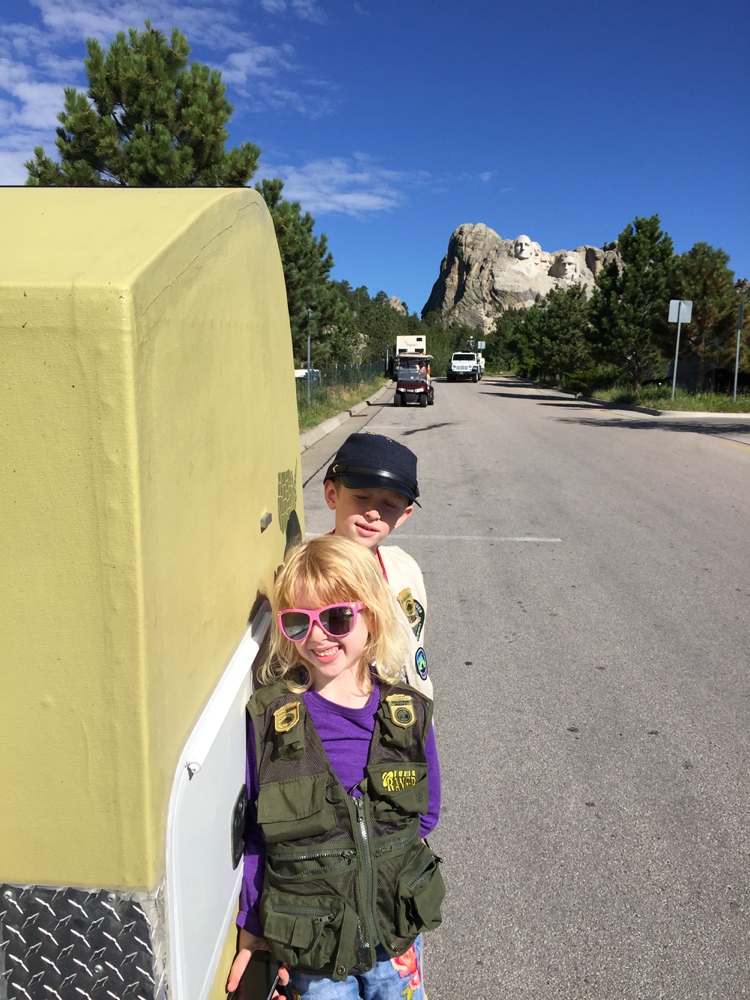 Hurley was so excited to be able to see Mount Rushmore, finally.

Our first stop was the visitor’s center, to get our Junior Ranger booklets. The kids dove right in, filling out the pages so they could earn their badges.

One part of Phoebe’s Junior Ranger mission was to hug a tree.

They did it! Badges in hand, we headed back out on the road, across South Dakota.

Incredible scenery greeted us at every turn in the road.

We had to stop several times, just to take it all in. Soon, we had made it to Cody, Wyoming, unpacked our tent, and drove off to the Cody Nite Rodeo.

And the cowboys were getting restless…

When it was time for kid volunteers, Jackson jumped out of his seat and ran down onto the track. (Check him out in the orange sweatshirt.) He raced with the other kids to try to get a ribbon from a calf’s tail. He wasn’t a winner, but he did manage to scoop a bunch of dirt into his pockets as a souvenir!

We stayed so late that we missed our dinner! We made an unsuccessful attempt for late-night grub at the famous Irma Hotel, then ultimately decided to just turn in for the night. What a fun day!

Day 2 was another long driving day, but we did manage to fit in some fun between the miles. After some birdwatching and organization at the campground and a quick trip to Target for some supplies, we were on the road to Iowa.

Goodbye, Moraine View State Park! We didn’t love the goose droppings everywhere or your kinda gross bathrooms, but the lake view was awesome!

Phoebe, (almost) 6 going on 16, singing along (loudly)  to Rilo Kiley’s “Accidental Deth” on the road.

The people of Iowa welcomed us.

Thumbs up from the driver as we cross the Mississippi River.

When we were ready for lunch, some quick online research led us to Dewitt, Iowa’s “grandest park,” according to the city’s parks and recreation department. Lincoln Park was just right for a quick picnic and some playground time. Not to mention staring at this … interesting statue. (Is it a beaver?)

So many wind turbines, everywhere we look.

We made it to the Field of Dreams in Dyersville, Iowa in the late afternoon. It was a very hot and sunny day, perfect for baseball!

Alas, no Kevin Costner or James Earl Jones sightings, so it was time to “Go the Distance” across the rest of Iowa and into South Dakota.

We watched a gorgeous sunset along the backroads of Iowa at about 9 p.m. We were trying very hard to make it to the Blue Bunny Ice Cream Parlor in Le Mars, Iowa before its closing at 10 p.m., but were thwarted by multiple road closings. Down dirt roads in the dark, tired and frustrated, we gave up. Bellies empty of ice cream yumminess, we pulled in to Newton Hills State Park in Canton, South Dakota at about 11:15 p.m.

I love the Field of Dreams pics. One of my favorite movies. Thanks for posting and have a wonderful trip.

So many adventures, so little time. Looks like you’re making the most of it. Glad the birdwatching has been productive.

Today was the day we began our road trip out west, to visit the extended Spence Family at the Grand Tetons! Day 1 was all about being on the road. Our alarm woke us up at 3 a.m., we packed our coolers, woke up the kids, and were on the road by 4 a.m.

Stop 1 was a gas station for coffee before sunrise. Necessary.

By breakfast time, we had made it through Pennsylvania and West Virginia and just over the border into Ohio. Breakfast at Sonny Boy’s in Bridgeport…

The reviews said it was the perfect little “greasy spoon” and it was. Cheap and yummy eggs, pancakes and coffee hit the spot.

By late afternoon, we were ready for lunch. We had made it to Indiana and grabbed some pizza in Richmond at a fun place called Pizza King. Each table has a phone to call in their order to the kitchen.

Back on the highway, and we noticed a plane flying low and diving. It was a crop plane! It came so close to Jackson’s window.

We finally made it to our home for the night, Moraine View State Park in Le Roy, Illinois! We had a great site right next to the lake.

We were exhausted from all the driving, so it was early to bed for all of us. A great first day on the road!

Great blog about your first day on the road. Good luck and safe travels. See you in Jackson, Jackson.

Jackson turned 7 on July 13th, and we celebrated with friends at a rainbow-theme art party at The Delaplaine Visual Arts Education Center in Downtown Frederick!

The party began with an art project, naturally. Jackson chose the Klimt Trees project, which involved creating an abstract tree in the style of artist Gustav Klimt (famous especially for his work, “The Kiss”).

Next, they rolled paint on top of the entire creation. Once dry, the tree shape was peeled off to reveal a colorful, swirly tree. Then, the kids added glitter, sparkles, and other embellishments!

This was Phoebe’s finished tree – lots of purple and lots of glitter!

After working up an appetite creating art, the kids got down to eating!

We may have gone a wee bit overboard with the rainbow theme… but once we got started, it was hard to stop!

Each kid was allowed to fill a box at the candy bar as part of the goody bags.

And then it was time for cake! Molly and Phoebe had a great time putting together all the layers of the rainbow!

Happy 7th birthday, Jackson, and many, many more!