it’s wintertime, and we all know what that means — swimming! seriously. for some reason, we always seem to sign up for winter swimming lessons for the kids. thank goodness the hood college swimming bubble is back in action. we love taking the kids there for lessons. the college kids who teach them are always super. patient, kind, and knowledgeable. this year was no different, as we enrolled phoebe in her first set of lessons. we were a bit nervous for her — she hasn’t been around water much, and judging from her brother’s first swimming lesson at hood (which you can revisit by clicking here), we weren’t sure if she’d flat-out refuse to go in the pool, or jump in and love it! guess which one it was … 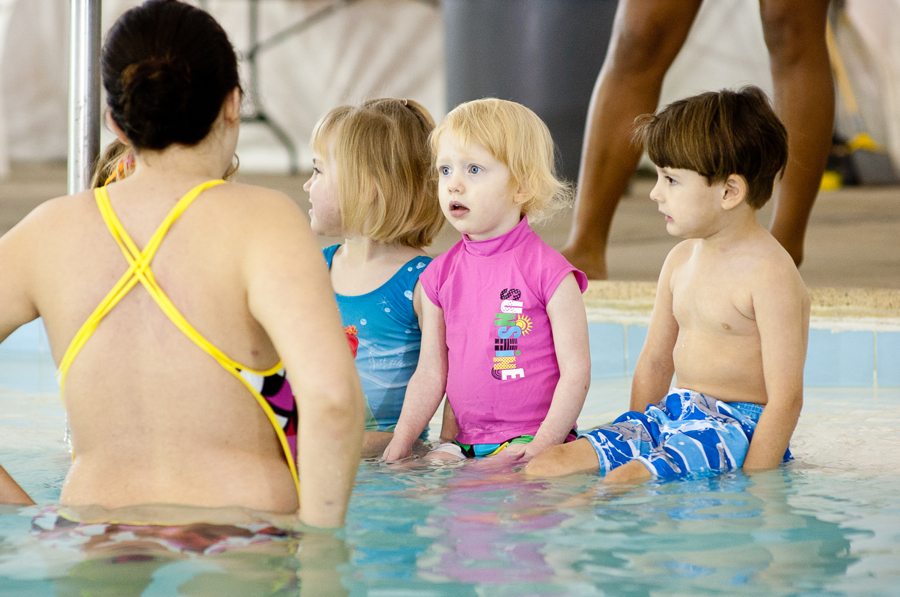 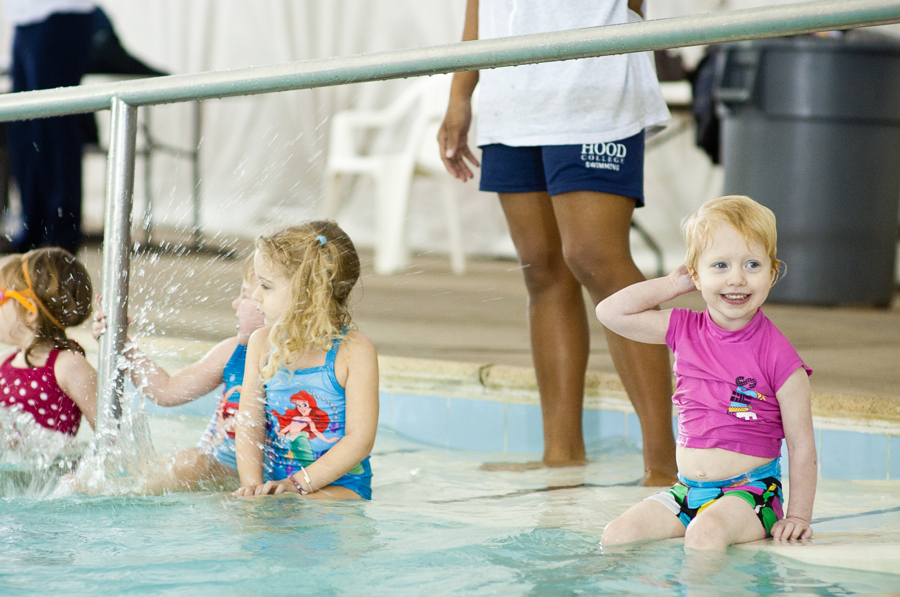 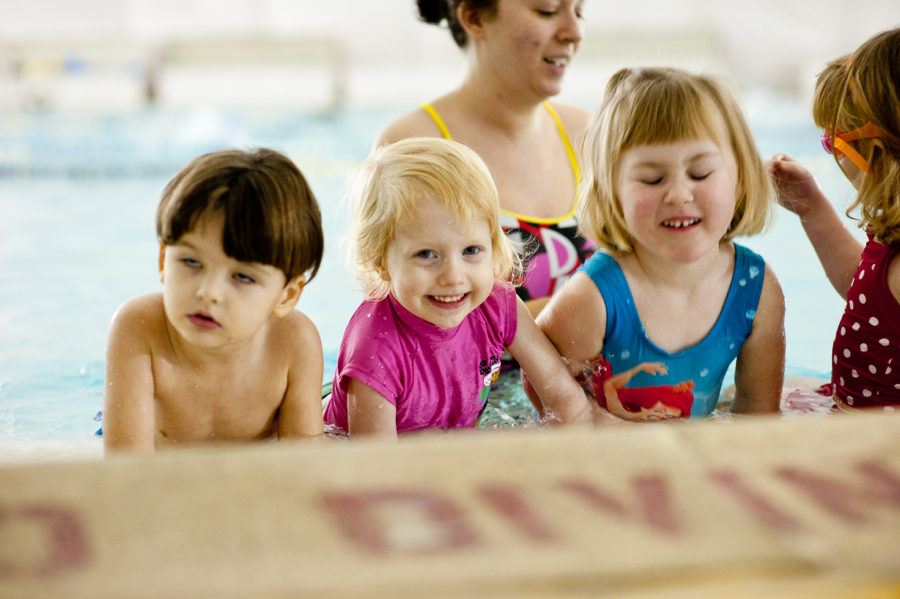 while phoebe was all smiles in the pool, molly and jackson were busy posting photos online and playing games.

the only part phoebe didn’t like so much was being on her back. but she toughed it out, and really enjoyed herself! next, it was brother’s turn…

jackson walked right down the ramp and into the pool, no problem!

when it was his turn to jump into the pool, he was super-apprehensive. but his teacher talked him into it, and he jumped… about one inch from the edge, but still!

and the important thing is, he kept doing it. kept jumping even though it really scared him. what a guy!

Good for Jackson and Phoebe! Looking at the pictures of Jackson reminds me of his father hanging onto the edge of a friend’s pool for deal life, barely in the water he was so afraid. Do you remember, David? xxoo

we heart idaho (and utah too!)

we anticipated our trip to idaho for a long time, and finally, in mid-september, we boarded a plane at dulles at an ungodly, early hour and headed west. we ended up in salt lake city, rented a car, and after a super long day of traveling (including a visit to the golden spike national historic site in utah), we finally met up with matt, naomi, and ginger in hailey, idaho. they were the reason for our journey, and it was so great to finally see them.

we spent a little more than a week hanging out with the idaho spences. we spent a lot of quality time together. the kids got to play, a lot. and the grown-ups got to talk, a lot. we did some fishing (another post to come from dave about his super-secret adventure with his bro). we did some touring. we did some rock-throwing. we spent a great few days at the gorgeous redfish lake near stanley, idaho. we did some hiking.

but the best part of the trip was simply spending time with our family. phoebe, jackson, and ginger became good friends quickly, and really enjoyed being around each other. and that’s priceless.

and the second-best part? on the way home, we spent an overnight in salt lake city, where we were reunited with molly’s high school friend karyn. she showed us around salt lake (including a great hike up ensign peak, where we got a super view of the city) and she and molly caught up on the many years since they last met (over some awesome mole at a tasty mexican restaurant).

all in all, it was a wonderful break from the everyday. thanks to matt, naomi, ginger, cooper, camo and simon for inviting us into your home. we hope you all can come to maryland some time and soak up our sites soon. and best wishes to karyn and justin, as they prepare for their wedding in december! hope to see you both again soon (definitely in less than 15 years!).

when we were in idaho, aunt naomi introduced jackson to gymnastics, which she loved to do as a child. she took us to an open gym at a club at the end of her street, and jackson loved it. so, we signed him up for classes here in frederick! the first class was on thursday, and jackson was so excited! when he and molly walked into the gym, though, molly panicked. every other kid in his class, and every other kid at the gym was a girl. not just a girl, but a girl wearing a fancy, professional-looking gymnastics leotard. jackson was wearing a t-shirt and mesh shorts. molly started to panic a little — would jackson feel weird, want to leave? the answer was no. he loved it. and his teacher ended up being a teenage boy, so no problem at all. jackson did ask at the end of class about why there were so many girls, but he just shrugged. he’ll be back next week! (please forgive the images’ quality – they were taken by molly’s phone from an obvious distance. we’ll send the pro next week!) 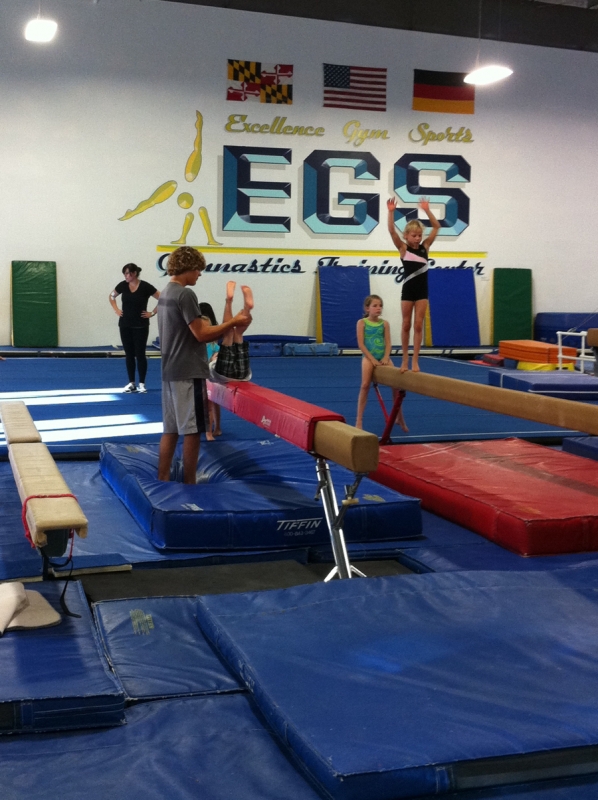 today, jackson became an official kindergartner! he’s now among the oldest students in miss heidi’s class at monocacy valley montessori public charter school, where he has attended for the last two years. he has the same teacher, and is in the same classroom, but now he is the “big man on campus,” and gets to stay all day, eat lunch with his friends, and help the younger students get acclimated. he’s in school from 9 to 3:45 every day, and now has music, gym, spanish, and art classes as well.

it’s hard to believe that only 2 short years ago, we pushed jackson in a stroller to his first day as a preschooler at mvms! today, he rode a two-wheeler the whole way to kindergarten. he’s gotten to be such a big boy!

when molly asked jackson how he got such big, strong legs to be able to bike all the way up big hills to school, he replied, “from santa!”

ms. king, the principal at mvms, hands out a carnation to each student as they arrive at school, and asks them to give the flowers to their teachers. it’s a nice little tradition! jackson hung up his backpack in his new kindergarten spot, then headed into the classroom without a second glance. he truly felt at home there, and that’s an awesome feeling for us, too!

while big brother was at school, phoebe was a little lost. she asked “where did brother go” several times, but generally she had a great day, playing and pretending. she even helped mom bake up a special surprise just for jackson!

mom’s special chocolate cupcakes with orange icing and a “k” for kindergarten! (yes, molly did use tweezers to position the sprinkles. don’t judge.)

jackson couldn’t have been happier about the cupcakes. he said it was his favorite part of his first day! but he did have a pretty great day, in general. some highlights? he ordered lunch from school for the first time (chicken nuggets and green beans with chocolate milk), he enjoyed Spanish lessons (“hola, mom!”), and he couldn’t stop telling us all about “PE” (“that means exercise, guys!”). we think this is going to be an awesome year for our little learner! and next year, when jackson graduates into 1st grade, phoebe will be a student at mvms, too!
Tags: cupcakes,Dave,jackson,kindergarten,molly,mvms,phoebe,school

WOW!! What a BIG Kindergartener! So proud of Jackson!!Love the cupcakes too! What happened to going out for Moose Tracks?? We’ll have to take him for that treat at the Creamery! Thanks for sharing the pictures and the story! Luv u

Thanks for the post ! We love being able to “share” in the day to day happenings of all of you!!