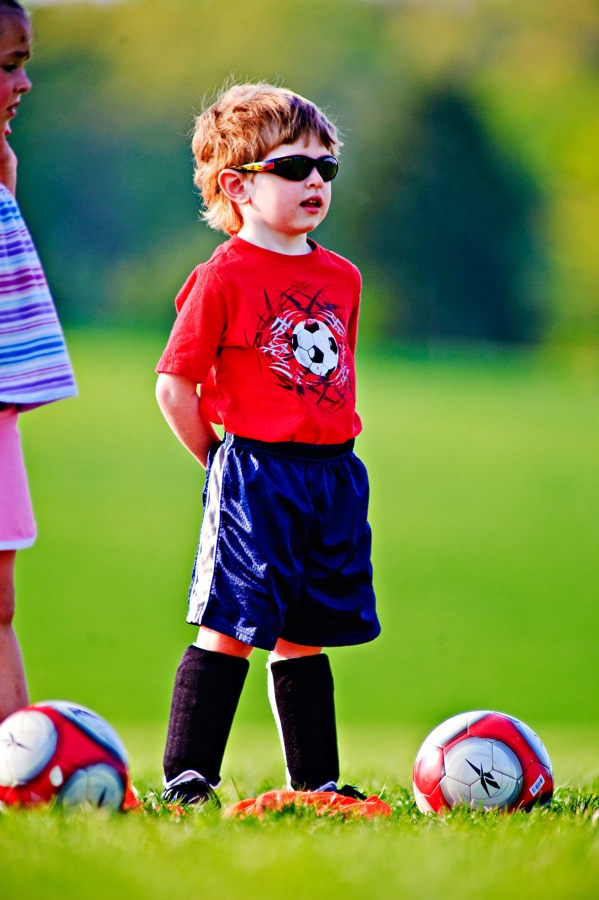 many months ago, jackson watched his big cousin, jacob, play in a soccer game. his uncle paul told him if he liked it, maybe his mom would sign him up to play, too. nice thought, paul! too bad there weren’t any sign-ups until january, and actual gameplay didn’t happen until april! so, after many months of “mom, is it time to play soccer yet?” jackson’s wish finally came true this week! he became jackson spence, soccer stud!

the whole family went to old national pike district park on thursday to witness the historic occasion. as usual, jackson was timid at first out on the field, but he warmed up quickly thanks to a truly awesome coach. we highly recommend the “uk petite” program through frederick county parks and recreation!

it’s a fun, hour-long games-based approach to learning soccer skills. coach steve had a fast-paced, energetic way of getting all the kids involved. he learned all their names within minutes, and encouraged them to participate with lots of success. jackson really responded to it, and got the hang of dribbling and running while kicking the ball quickly.

every few minutes, the coach sat the kids down to teach them each game, basing it on a popular kids movie or tv show (such as “finding nemo”). the funny thing was, jackson watches lots of “old school” tv, so he didn’t understand some of the references! one of the games they played was called “dora and diego,” named after the show “dora the explorer.” jackson has never watched that. so, when we got in the car after the program, molly asked jackson what was his favorite game. he replied, “the san diego one!”

we all had such a great time that we decided to celebrate with “soccer pizza” (with pepperoni as the “balls”) and ice cream on the way home. another great spring day in frederick!

Love the soccer gear!!! You go Jackson! Love the “soccer” pizza idea…any reason not to cook!! Thanks for sharing the pics!

Way to go Jackson!! You are looking good out there on the field!!