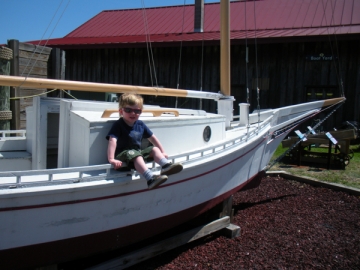 for the last several years, dave has been bringing home gorgeous photos from weddings he’s shot on the eastern shore of maryland, and we’ve been saying how fun it would be to visit there as a family someday. well, someday was this past weekend! (click on this link to see more images from our trip!)

dave, molly and jackson piled into the car on friday and headed to easton to the historic tidewater inn. we found a great deal to stay at the hotel where dave had shot a wedding last year, and it was just minutes away from the wedding he shot saturday at the oaks in st. michaels. (check out his awesome images from the day on amy raab photography’s blog listed under “meghan and jeff.”)

the eastern shore is known for boating and beautiful, small, historic towns with lots of character and fun shopping and dining. on saturday, while dave was at the wedding, jackson and i visited the chesapeake bay maritime museum grounds in st. michaels, where they were hosting bay day. we climbed aboard lots of model ships and watched boats out on the water, petted some turtles and just generally had a blast.

the peekaboo game took on a new twist as jackson discovered port holes! 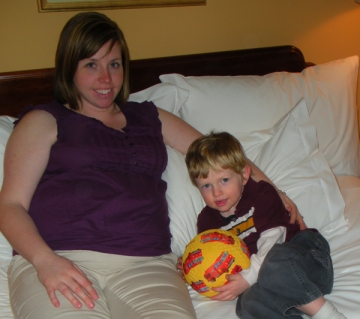 our cozy hotel room had two small beds with lots of comfy white down pillows and duvets! jackson loved jumping on his own bed and curling up with the new ball he found at a cool toy store in downtown easton.

it was such a lovely weekend, weather-wise, that we ate our dinner outside friday night at the lovely scossa restaurant in downtown easton. jackson enjoyed a vanilla gelato for dessert while dave and molly savored some cappuccinos.
Tags: boats,david,eastern shore,jackson,molly