dave’s birthday at the railroad 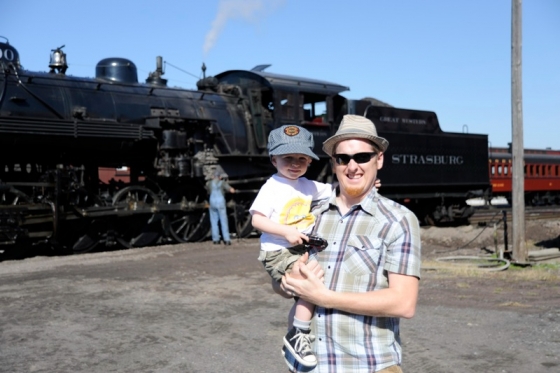 when asked how he wanted to spend his 33rd birthday, dave responded with a big idea — let’s take a day trip to the strasburg railroad in pennsylvania! and so we did.

the trip north took a bit longer than expected, but we arrived by noon to see a parking lot full of visitors and a yard full of trains. it was an absolutely gorgeous, sunny fall day and we couldn’t wait to get on the train and see the amish countryside. 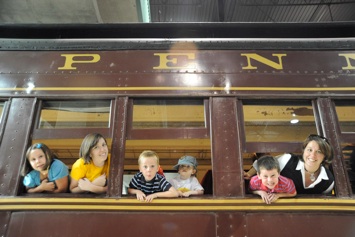 we boarded the dining car and were promptly served carafes of lemonade and iced tea. jackson was mesmerized by the train itself, as well as all the cows and vehicles we passed on our 45-minute ride. but he still managed to eat his hot dog and chips before the ride was over!

after our ride, jacob, josh, sarah and beth arrived! we were so happy they could make the trip to meet us. we spent the afternoon with all of them, exploring the railyard (the crazy loud steam whistle was too much for the kids — and drama queen beth!

later, we ventured across the street to the railroad museum of pennsylvania. there, we explored tons of model railroads on display alongside their enormous counterparts. the kids loved walking through the real railroad cars and especially had fun playing in the education center, where legos and other toys abound.

during the course of the afternoon, we spotted the quaint red caboose motel and restaurant just up the street from the railyard. what a cool place! as we got out of our cars, we saw a bevy of farm animals just waiting to be visited — small horses, pigs literally rolling around in the thick mud, goats jumping on top of fences and roosters running wild. the kids loved checking out all the crazy animals.

but eventually, we went inside one of the rail cars for our diner-like dinner. as we were served our french fries and sandwiches, the waitresses pushed a special little button near the hostess stand that made the whole car rumble, as if we were taking a real train ride! the kids weren’t fooled for long, but it was fun to watch their faces at first. 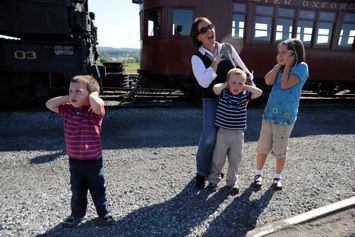 all in all, it was a fun, happy birthday for dave. it was a long day, but we were glad to make the trip and spend such a lovely day together with family! thanks barainyaks!!

« day at the zoo trick-or-treating, night one »